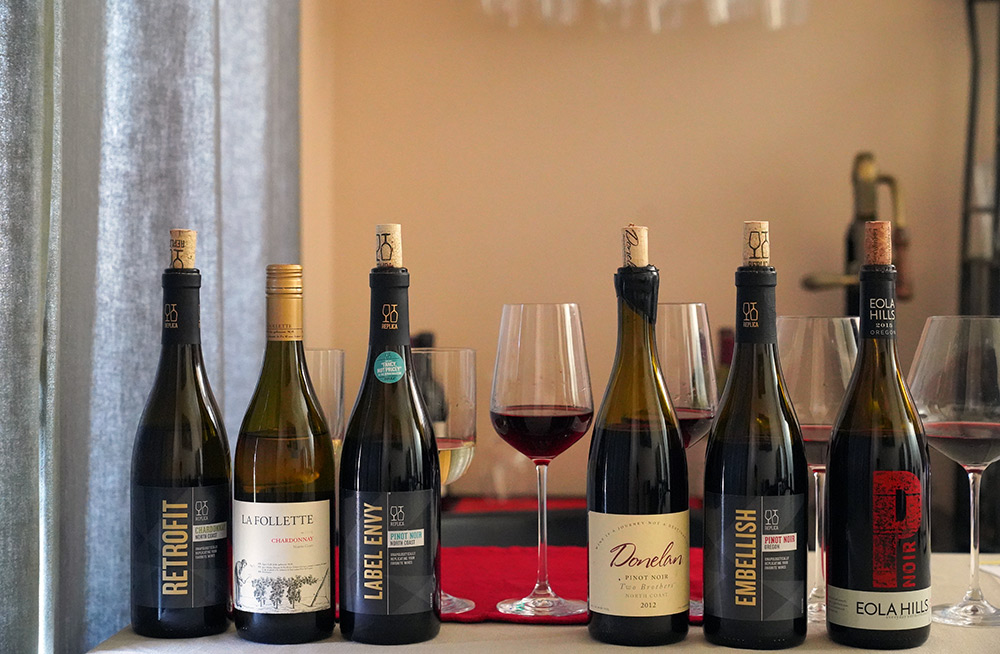 It’s no secret to most oenophiles that what makes a wine great can’t be summed up into one reason. A wine can be affected by the quality of the grapes, the location they were grown, and the method used to turn them into wine. The cost of a wine is also often based upon several of these factors. What if there was a way to cut some corners and make something very similar to that high priced wine, yet cost only a fraction of the price?

Just as margarine was made to mimic real butter, a company (Replica Wines) is now copying wines at a Colorado lab (Ellipse Analytics). Replica Wines say that they reverse engineer wine in a lab by discovering the 560 chemical compounds that make up it’s taste, aroma, finish, color, and more. They then take this data and use it to create their knockoff wines that are supposed to be very similar to some well known wine brands. Various blending techniques and “science” are used to create these knockoffs. They don’t say exactly which well known brands are being copied, but explain that it is no different than when a generic brand copies a major brand. For my latest wine comparison, I setup a blind tasting for myself. I purchased 3 bottles of Replica’s wines and 3 normal wines that represented the areas these Replica wines were supposed to mimic. Ultimately, this was just another fun excuse for me to practice trying to break down wines and improve my tasting skills. My wife poured the wines for me, and wrote the answers on a notepad. All glasses were numbered. Would I be able to determine which wine was Replica’s? My first comparison was between two North Coast Chardonnays. My normal bottle came from La Follette, a smaller winery located in Sonoma County. I really liked this 2014 Chardonnay. This is saying something from someone who didn’t really like white wines too much until only a couple of years ago. Maybe my tastes are improving enough that I appreciate white wines more now. This bottle’s aroma had a great mix of ripe fruits, and a taste full of peaches and pears. Replica’s wine, called Retrofit (2015), seemed like a fainter Chardonnay in most aspects. Lighter color, grass on the nose, and a much more pronounced butter taste on the tongue. My initial feeling was that of surprise for how well it tasted, but then the butter taste seemed too strong. It seemed almost unnatural. I heavily used this aspect to make my blind tasting decision for these two. I was correct! For my second comparison, I was blind tasting two North Coast Pinot Noirs. The normal Pinot Noir was a bottle of 2012 Donelan “Two Brothers”. Donelan is another small family winery in Sonoma. This bottle looked great from the moment I received it. They used the classic wax seal instead of the more typical foil coverings we see mostly today. On first inspection, I could tell that this wine was a little older. It was much more transparent. This was a point I was going to use to build my case about what wine this glass was from. Its aromas were busting with lots of red fruits, especially strawberries. It’s taste reminded me of Cherry Coke. The Replica comparison was called Label Envy (2015). Its color seemed much darker with almost a hint of burnt orange. From my first smell, it’s pungency was strong. Something was way off about this wine. It’s taste wasn’t much better. There was something chemically odd about the taste. I quickly guessed that this bottle had to be Replica’s based upon these unfortunate features. Correct again! My final comparison was for two Oregon Pinot Noirs. The normal wine was a 2015 Eola Hills Pinot Noir. My wife had a work trip up to Portland, Oregon a while back and returned with this bottle for me. I’m definitely a lucky guy. Eola Hills is definitely one of the larger wineries in Oregon and they deserve their success. They were one of the earlier wineries to get started in the 1980s when Oregon wine wasn’t very well known. This bottle tasted like standard Willamette Valley Pinot Noir to me. Nice even tannins and mild darker fruits on the nose. Nothing mind blowing about this bottle, but just a solid standard Pinot Noir from Oregon. Replica’s copy was called Embellish (2014). This was without a doubt the hardest comparison to figure out. Embellish was just as solid and very similar. Embellish’s wine was a little more transparent and looked older. This was my first clue. I tasted both of these a couple more times to try to fine something else. I decided to see if I could try to use Replica’s blending methods against them and give away their wine. Embellish’s wine seemed to have a slightly less typical Pinot Noir taste to me. I honed in on something in the taste that just didn’t seem natural to me. I was correct, but felt a little less sure about this one than the others. That 50/50 chance certainly helped me out.

I managed to get all three correct. Very proud of myself. Makes me feel that my skills are definitely improving. I am overall impressed with Replica’s wines. Other than the bottle that seemed to have gone bad, the other two were on par with what they were potentially copying. I probably won’t rush right out to buy more of their bottles though as I do ultimately prefer the real thing. If someone were to hand me a glass of their wine though, I certainly wouldn’t mind.

How about you? Would you try their wines? If you have, were you able to tell the difference?